Fjordinheim is a location in southern Gaderon, one of the main continents in Uloff. It serves as the homeland of the Jaar and the capital of the 2nd Legion. 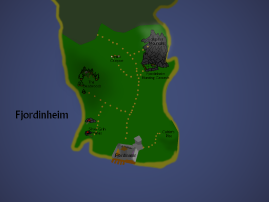 Fjordinheim, as the name suggests, is a large fjord that contains dense forests, wet grasslands, and rolling plains. It is home to many types of wildlife, including the Livingwood in some regions. It also has a very mountainous region amoung the eastern side, and a dense forest amoung the western side. In the south, a large city known as Fjordinmiir spreads across the coast. The well-defended city is home to the Jaar race, and serves as the capital city of the 2nd Legion.