The Gnomes are a primary species appearing in Age of Warscape and Age of Warscape: Origins. They are one of the ten dominant species on Uloff, and are a common race appearing in northern Gaderon. The race, recognized as small, short-tempered humanoids, are well-known for creating machinery, war machines, and weaponry. They are led under the Gnome Council, which is a small group of three Gnomes that lead the entire race. The Gnome race is allied with the 2nd Legion, and is a playable species in the faction. 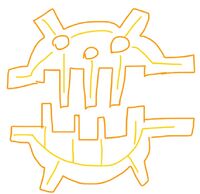 For centuries, Gnomes have inhabited the northwestern, mountainous side of Gaderon, known as the Joral Mountains. They have lived underground, inside and below the vast mountain range of Joral Mountains. Through the years, this race had built a magnificent city underground, naming it "Tubetown", due to its transit system revolving around large tubes. Throughout their isolation underground, the Gnomes have mastered the art of machinery, and have discovered how to utilize sulfur as a weapon. They have also discovered the use of steam-powered machinery, giving them the ability to create vehicles and mechsuits.

The Gnomes had built a huge arsenal of different machinery and weapons, and have utilized their knowledge in harnessing electricity. Their inventions were later noticed by the Jaar, who were impressed by the Gnomes' creations and innovations. The Gnomes found the Jaar in their splendor, due to their heavy armor, large size, and use of axes. The two races eventually formed an alliance with one another, and became close friends. The Gnomes began to trade firearms, explosives, machinery, and mechsuits to the Jaar, who gave them battleaxes, armour, traditional food, animal pelts, rare metals, and paint in return.

When the Great War began, the Gnomes happily joined the 2nd Legion. However, they requested a cease-fire with The Arbiters shortly after, as they had not built their defenses enough to outmatch the armies of the Arbiters. The Arbiters reluctantly accepted their request, warning them that "any act of aggression towards The Arbiters or aiding the 2nd Legion will terminate the cease-fire". Now, the Gnomes build their arsenal of machinery and weaponry, waiting to use it against The Arbiters.

Gnomes greatly resemble that of a Human and a Jaar. The only distinctive feature between a Gnome and a Human is the Gnome's size, which can measure up to 3 feet. Gnomes are also known to have little to no facial hair, which is shaved in order to prevent getting caught in machinery. They are also known to commonly wear overalls, very light armour, work-gloves, and goggles. Rarely does a Gnome ever wear a full-set of armour.

A Gnome's hairline will usually fall back, and their hair will typically be very short. Gnome hairstyles usually consist of spiked up or combed forward hair.

As the "everyone is different" rule applies, most Gnomes take a great liking to bombs, gold, and watching others get blown up. Some might say the Gnomes are insane, which is due to the lack in fresh air that the race gets. Despite their insanity, Gnomes are seen to be incredibly smart.

A typical Gnome is also highly short-tempered, and are typically extremely easy to anger. The race can often be uncooperative due to their habit of doing things on their own.

A small group known as "The Council" leads the Gnomes proudly. The Council consists of High-Tinkerer Fizzra, Technoking Pinchblast, and Forgelord Feezlebor. The three all have their own strengths and weaknesses, and all make decisions for the race.

The Gnome race operates under an oligarchic government, with a group of individuals in charge of the race. This group, known as "The Gnome Council", makes and agrees on decisions, and all share equal responsibility for the race. There are only three spots on the Council, which are filled by old, wise, and experienced Gnomes. Once a previous member of the Council dies or resigns, a new member is appointed by the remaining Council. If all three members die, then they are replaced by relatives, offspring, or individuals elected by the people.

The Gnomes love machinery and building things, and take great pride in their creations. They love to show off their creations in the most obvious ways possible. The race also has a great liking towards firearms and explosives, and have a habit of testing them on uninhabited locations, usually for no reason at all. The race is known to build their buildings in walls and rocks, using a transit system to connect them all. They have also been known to be the first race to harness electricity, and to use vehicles.