As part of the Unified Community Platform project, your wiki will be migrated to the new platform in the next few weeks. Read more here.

The Herasothians (often abbreviated to "Heras") are a primary species appearing in Age of Warscape and Age of Warscape: Origins. They are one of the ten dominant races on Uloff, and a commonly appearing race in Moridahn and likely Strog'ar. Easily recognized by their lack in arms and legs (which are replaced by ghost-like wisps), their blue skin, and luminescent eyes, the Herasothian race specializes in advanced alchemy, and the harnessing of darker magic. The race is currently led by King Lamporus, though some have deserted their king to follow the 2nd Legion. The Herasothian race is allied with The Arbiters, though it is not a playable species. 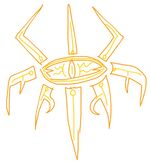 Herasothians immigrated to Uloff years before the The Corruption of Strog'ar from an unknown dimension. As a considerably newer race to the planet, the Herasothians had adapted to their new home, and had begun to build small villages across the planet. They had formed a fond relationship with the Elven race, finding interest in their Arcane abilities. They were then allowed to build their cities near Elven territory, which gave them access to rare materials and plants which the race can use for alchemy research.

Years later, the 4th Herasothian king died from a heart attack, and gave the next king, Zavaclien Lamporus, the throne. Lamporus had made significant changes to the race's policies and structure, and soon formed the race's monarchic government into an autocratic empire. The young king had also strengthened the Herasothian military, and had made them a lot less tolerant and more trigger-happy.

During the First War of Gaderon, the Jaar race had executed massive attacks on the Jin'tulu, which had made the race call for Herasothian aid (as the other Jin'tulu ally, the Humans, were busy dealing with Gnome attacks). Though the Herasothians wanted to remain neutral during the War of Gaderon, Lamporus ordered an attack on Jaar camps around the Oozing Marsh, which caused the destruction of hundreds of Jaar encampments, deaths in hundreds of Jaar and Gnome soldiers, and the destruction of multiple roads that the Jaar used to cross through the Marsh. The Herasothian Empire had also deployed multiple soldiers into Kai'Sheek, the Jin'tulu capital, to defend their allies from Jaar invasions.

When the The Great War had begun, the Herasothian race had joined The Arbiters, and the Herasothian Empire became strong allies and suppliers of the Blue Faction. They had also built their capital city on the coast of southern Strog'ar, Herasothia, in order to keep their main city hidden from enemies, and to keep their people safe from crossfire between the factional war.

Herasothians are easily recognizable by their deep-blue skin, aqua (or red) colored eyes, and their lack in arms or legs. Their hair is an indigo color, and can be seen in various styles. A Herasothian's hands are detached from their body, and are telepathically controlled. They are also seen with ghost-like tails in replacement of feet (which is also seen at the end of their hands and where their arms should go on their bodies). Most Herasothians, depending on their social class, wear formal attire, such as top hats and vests. They are most commonly seen wearing long capes which wrap around their bodies. Male Herasothians have more sculpted jaw structures and more masculine bodies, and Females have thinner faces and more feminine bodies. Female Herasothians are also taller than the males on most occasions.

A Herasothian is typically curious, friendly, and obsessive over order and formality. The race loves alchemy, and are seen as highly intelligent creatures by their allies. An individual can also be strict and aggressive, typically towards enemies or non-allies, and love to intimidate others. They are also seen as supportive, and care for their allies and their well-being.

Herasothians love experimenting, alchemy, potions, and magic. The race often takes pride in their work, and can be very obsessive over what they do. They are also highly ambitious, and love to show off what they made or found. Herasothians also enjoy exploring and venturing, and discovering new things.

The race currently follows the 5th and current king, King Lamporus. Although he is aggressive, strict, and militaristic, the Herasothians still follow him with respect. Lamporus has a hatred towards enemy races, and often orders aggressive attacks on any villages/towns that belong to them. Lamporus' actions are often questioned by his allying leaders, and are often seen as unethical and cruel to both his people and the enemy.

Herasothians formerly operated under a mostly monarchic government, having a sovereign ruler as their leader. However, the throne is often not inherited, but is handed down from the king to the Prime Minister of the Herasothian people. The race was able to have a say in any policies made by the government, and were able to freely protest and criticize their leaders. However, after Prime Minister Lamporus became the 5th king of the Herasothians, he had dismantled many policies and reformed the governmental structure.

Lamporus had reformed the Herasothian government into an autocratic imperialist government, firing many of his top officials and Prime Ministers, and transforming himself into an effective dictator/emperor (though still keeping the title of 'king' for aesthetic reasons) of the Herasothian race. He dismantled, reformed, and established many policies of the race, and had built up a militant army; effectively turning the race into an Empire. Dubbed the "Herasothian Empire", the race became much more powerful and formidable, and had became more strict. The people also lost a lot of rights concerning their power over the governmental body, including the right to protest and criticize the government. Lamporus also was given full power to do whatever he wanted to without the consent of the people or officials.