The Jin'tulu are a tall, Humanoid-reptilian race that are native to the continent of Gaderon, specifically within The Oozing Marsh. They are one of the ten dominant species of Uloff, being most common within central Gaderon. The race specializes in unique battle techniques, such as "Ground Fighting", and the use of powders and poisons in combat. Being primitive and tribal, the Jin'tulu mainly rely on close-range combat using hand-crafted weaponry.

The Jin'tulu are a playable race for The Arbiters. 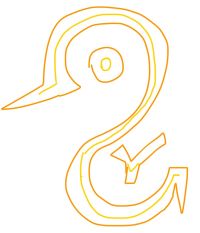 The Jin'tulu is said to have evolved from the native reptiles about two thousand years ago. Within the Oozing Marsh and Northern Fjordinheim, the race built their villages and began to flourish. They soon grew humanoid features, and began to build larger cities and developed tools and weapons. Soon, leaders were decided by a traditional public fight to the death. Whoever won this fight became the Chieftain of the race. They carried on until the early Humans came along. The Jin'tulu were interested in the race, and watched them build their civilizations. After becoming impressed by the races building skills, they would come out of the marsh with a peace offering. The Humans did not like it at first and were reluctant to accept the offering, but decided to welcome them. They had a great feast with traditional meals made by the Jin'tulu. Unfortunately, the Humans only brought themselves, and decided to not bring anything to the feast. Luckily, the Jin'tulu did not mind, as there was plenty of food for both races. The two races formed an alliance with each other, and gained a mutual friendship. The two also became trade partners, with the Humans trading armor, shields, weapons, food, and clothing; and the Jin'tulu trading poison, spears, clothing, helmets, and their traditional food. 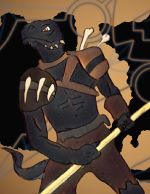 Jin'tulu resemble that of anthropomorphic lizards. The average Jin'tulu is 140 lbs., and will usually measure up to 6 feet tall. Humans and Jin'tulu do not differ too greatly, despite one being mammal and one being reptile. The Jin'tulu are reptilian, covered in scales. They are mostly teal or green, but those who are out in the sun gain black colored scales, eventually. Their eyes are similar to that of the Madagascar Velvet Gecko, having narrow black pupils, met by a red and orange color around it.

The male Jin'tulu has a larger snout than the female Jin'tulu. The females are also known to have slick, black hair, thin tails, short snouts, and smaller teeth. The males are known to have horns on the back of their bodies, sharper fingernails, and a lack in any body-hair. Both genders have a digitigrade stance. Males are often seen with a much broader shoulders, and a larger body frame overall.

Jin'tulu are known to be aggressive in battle. They get straight to the point, and few show emotion. They use special combat tactics such as "Ground-Fighting", which is a technique that usually consists of burrowing underground, wait for enemies to get near their spot, and jab them with sharp spears. Poison that induces writhing pain is their signature weapon, and will usually coat their weapons in this poison. 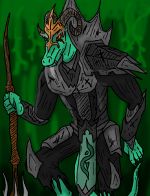 Their leader is currently Chieftain Rhanakhed. He is quite old, but skilled in fighting. Rhanakhed is known to be aggressive in combat, and will do anything to keep his people safe and secure. He does not normally get along with other race leaders (except Human leader King Earnet), but tries to tolerate anyone he is allied with. He is known to get along with King Earnet quite well, as they both share similar ideals and combat techniques.

The Jin'tulu have a clan-like government, with a chieftain in charge of the race. The chieftain is responsible for all the decisions of the race, and hold the responsibilities of keeping the people happy, alive, and healthy. Every 25 years, the Jin'tulu set up a ceremonial arena in which they decide the next chieftain. The current chieftain is to fight against Jin'tulu who wish to take his place, until either combatant is mortally wounded or no longer able to fight. If a chieftain either steps down or is too old to serve his people anymore, the battles are instead between multiple Jin'tulu looking to become the next in line.

This ceremony will only happen a few times within a Jintulu's lifespan, so many who attempt to overtake the chieftain are younger members.

The Jin'tulu are very tribal, and love fine-art and crafting. They also create traditional music, which is made with chants, hums, and tribal instruments. They are also known to love painting and art, and will proudly display their creations everywhere. Jin'tulu also have a reputation for using chemicals and mixtures to create a signature poison, which invokes heavy irritation and writhing pain. The poison can also be fatal if it gets into the bloodstream.

Jin'tulu will often use sticks, rocks, and twine to create weapons. These weapons will usually be sharpened, and will commonly be very spear-like. They will trade for higher quality weapons when preparing for an oncoming battle. Their armor can range from copper and tin to highly durable metals that they create themselves, the latter usually reserved for the Chieftain and his guard.