The Latlazerians (abbr. "Latlas") are a tall, humanoid species that are native to the continent of Moridahn, but are found globally. They are one of the ten dominant races of Uloff, and are highly common within Gaderon and Moridahn. The cat-like race is globally known for their formality, beauty, and their unique magic that allows them to contort dimensional space. The race is also highly intelligent, as well as being highly talented and quick-to-learn, being able to adapt to how the world is changing. Although rare to see in combat, as they mainly serve as entertainers and tavern workers, Latlazerians are a formidable opponent on the battlefield due to their quick-learning and their powerful magic.

Formerly the slave-race of Uloff, the Latlazerians have since been freed and have built their massive, uniquely designed structures and towns, along with forming a positive reputation amoungst the other Uloffian races, primarily due to their beauty and magic.

The Latlazerians are allied with the 2nd Legion, but are not a playable race. 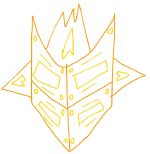 Latlazerians originate from the far west side of Moridahn, near the coast. Most Latlazerians were poor, living in shabby houses made of clay and eating any small animal that they could catch. Latlazerian children were commonly playing in the waters, and adults were out scavenging for food in the nearby wilderness. In this time, Latlazerians were oblivious to the fact that they were highly magical, and had to hunt with their hands or spears. Some hunting adults were lost and eaten by wild Yihuus, and others got lost in the wilderness, unable to find their way back.

The Latlazerians began to migrate to find a better home, and became closer to nearby civilizations. The race attempted to build their civilizations near Human outposts and towns, but were eventually destroyed and captured. They were captured by Human forces, and were forced into slavery. Most males were forced to do labor, and most females were forced to entertain (singing, dancing, bartending, etc) due to their natural beauty. Latlazerian slave trading went around to other race civilizations, most commonly the Jaar and Dark Elf.

Eventually, a Latlazerian named Al'manalius Zilatican, a descendant of the deceased Latlazerian ruler, Laai Zilatican, had stepped up, and led a resistance group that liberated all of the captive and enslaved Latlazerians. He taught the Latlazerians about their magical properties, and later was declared the new Latlazerian king. Due to the slave trade across continents, Latlazerians that freed themselves using their powers (that they have learned from rumours) began to establish civilizations everywhere, along with creating their capital city Lazareith in Strog'ar. The other races took note of the Latlazerian's power and began to respect them (except for the Herasothians, who abhor them). They then began to live alongside the other races. When the war between The Arbiters and the 2nd Legion broke out, Zilatican had declared to join the 2nd Legion due to his hatred of Humans for enslaving the race. Most of the race had also respected their king's decision and joined the ranks of the Legion, some Latlazerians had instead either remained independent, or had joined the Arbiters. 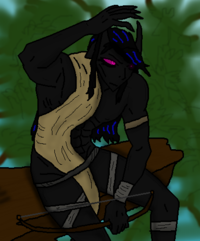 All Latlazerians are bipedal Humanoids, being highly similar to the body structure of Humans. They are recognized by their strange facial shape, having two pointed tips on the top left and right, giving the appearance of horns. Latlazerian hair is typically black in color, and is seen with white or gray (and sometimes red) stripes going down through the hair, though is often dyed. The hair is usually shoulder length in both males and females (though female hair is usually longer). A Latlazerian's skin is a dark grey tone, almost being completely black. A Latlazerian's eyes can have a wide range of colours (which can vary from green, red, yellow, blue, orange, white, and purple). Latlazerians of both genders have more toned muscle structures, which is usually not as toned in females as it is on males. A female Latlazerian also has a feminine body structure, where a male has a more masculine. Latlazerians also have small, pointed ears, similar to that of a felid's, on the sides of their heads (though their ears are often covered by their hair). Common Latlazerian attire consist of formal clothing, usually involving in coats, vests, ties, bowties, knee-high boots, and black pants. A Latlazerian's coat will usually be purple colored. However, it is also highly common for Latlazerians of both genders to primarily wear minimal clothing, due to the fact that they can overheat easily due to their dark skin tone and their high sensitivity to warm-temperatures. Such clothing often covers only sensitive areas. Latlazerians will wear more formal clothing during special occasions.

It is genetically impossible for a Latlazerian to be largely overweight, due to any unnecessary fat being directly converted for energy. As a result of this, Latlazerians are thin, making them more attractive to other races.

Latlazerians are highly-known for their natural beauty, and are a high-value to all races, especially the females. Female Latlazerians are known to be extremely seductive, and are loved by the other races of Uloff (except Herasothians).

Latlazerians are more secretive and like to stay isolated. They are calm, formal, and very proper. Latlazerians care for fellow Latlazerians and any allies, and will aid and help them in any way they can. However, an angered Latlazerian is a force to be reckoned with. Latlazerians of both genders are well known to be highly seductive due to their arousing appearance, calm voices, and choice of wording. They are also known to be very loving to those who they cherish, and will hold them close and do everything in their power to keep them safe and happy.

Darker, malevolent, and homicidal Latlazerians are referred to as "Latlazerian Demons", for their demonic nature and abuse of their powers. They are often regarded as not Latlazerians, as most of the race do not want to be labeled for their actions and behaviours.

The race is also well-known for their strange, felid-like behaviours. Content Latlazerians often make a purring sound, which is made by vibrations in the throat. The race also tends to sleep often, and occasionally pounce at others (usually with reason). The Latlazerian language, Latlish, contains cat-like noises. They also like to spend time with loved ones, and often stay in close proximity to mates.

Latlazerians are also highly sensitive to warm temperatures, which result in them getting overheated easily. Due to this, Latlazerians tend to wear minimal clothing, along with them preferring cooler temperatures.

Latlazerians follow under their monarchic leaders, King and Queen Zilatican. The Zilaticans cares for their subjects, and treats them all equally and kindly. However, King Zilatican is noticeably aggressive to outsiders and is intolerant to the Human race, and will kill those who question him or show any sign of threatening his people. Queen Zilatican is usually very quiet on most occasions, and only becomes aggressive when agitated.

The Latlazerian race operates under a monarchic government, which two individuals in charge of the race. These two individuals, titled as the King and Queen, have absolute power over the race, and are responsible for the entire race. The first position of King and Queen is usually inherited by the son or daughter of the previous King or Queen. The second position is given to the spouse of the first individual. There is never only one leader, as the current leader is to be married, and have at least one offspring to inherit the throne. The monarchs also appoint a Prime Minister to aid them in performing everyday operations and diplomatic missions, and are chosen to be the representative of the race. There is normally only one Prime Minister per monarchic rule. If a monarch does not have a spouse, then the Prime Minister temporarily acts as the leader of the Latlazerian people.

The current Prime Minister of the Latlazerian is Zontho Nitrous.

The Latlazerian culture has always been mysterious, yet interesting. They are normally known to be reclusive and isolated, and dislike interaction with other races. The entire race is well known for their art and crafting, and their love in building and designing. They are also highly formal, and only break their formality if absolutely necessary.