Veranitate, otherwise known as Lord Jesavich or The Eternal Necromancer, is a vicious dark entity who serves as the main antagonist of Age of Warscape: Origins and Age of Warscape. Living for thousands of years by transferring his consciousness and soul to multiple host bodies, Jesavich has become one of the most powerful and infamous individuals in the multiverse, mastering all forms of magic and living the life of all ten Uloffian races. The Eternal Necromancer aims to consume the souls of every individual in order to gain the power to obliterate all of time and reality.

Jesavich's spiritual essence is represented by a tall, cloaked, humanoid body that is shrouded in a cloak that's so black, it is said to seemingly absorb light around it, giving him an appearance of being a "hole in reality". His most distinctive feature is a white, blank mask that seemingly floats within an empty void within his hood, lacking in any indication that he has a face. This form is not physical, and is just a manifestation of his soul. Thus, he is unable to harm any physical being without a host. 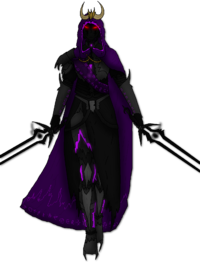 When The Eternal Necromancer possesses an individual, more often than not, he will reform the individual's body to create his avatar. His avatar resembles a Human male with pitch-black, slightly translucent skin. He also has luminescent eyes with red sclera and black iris, as well as luminescent red teeth, which are jagged and sharpened. His neck also does not seem to be whole, as it is made up of various veins, old organs, and his esophagus.

The avatar often wears a dark-grey and purple armour set, which has a purple cape and hood attached to it, along with a purple sash. A notable feature on his armour set is the metallic, claw-like extensions found on his fingers, which act as a secondary weapon. His armor provides high resistance against magic attacks, and prevents him from bleeding. It bears a slightly-similar resemblance to King Earnet's armour set, having a similar design. His armour, however, is unique to his character only. This armour also allows for him to use magic and necromantic powers and abilities without his armour interfering.

In the occasion that Jesavich does not reform the body of the vessel he possesses, he assumes the appearance of that vessel. No changes are made to the body, allowing him to go unnoticed.

Jesavich is unusually calm, patient, and emotionless. He is often soft-spoken, and uses his strange speech pattern, which is often metaphors and hidden threats, to manipulate even the most strong-minded people into doing his bidding. His patience and ability to easy manipulate people make him an even bigger threat, alongside his immense power. He is also known to drive people to insanity simply through getting into their heads, and manipulating them from within. Not only that, but he is also well-known to aspire fear and hatred simply by his presence, or even a mention of his name or one of his aliases.

As an immortal being that simply can possess another individual if his vessel is killed, the Eternal Necromancer has developed a strong sense of patience, knowing that he has all the time in the universe at his disposal to exercise his carefully-thought out plans, which alone take hundreds of years for him to plan alone.

However, the Necromancer also has a much more darker side to him. He secretly has a nihilistic personality, who has no care for any life whatsoever, including his own. He is extremely homicidal, as well, and has no regard for emotions, empathy, or forgiveness. He is also careless when it comes to his well-being, as he can (and will) willingly hurt himself in order to achieve something.

Throughout his vast lifespan, Jesavich had learned and mastered all forms of magic, including some that are nearly impossible to learn alongside other forms. Although necromancy being his strongest form of magic, due to him being a living incarnation of such, he uses all forms to his advantage. Knowing the deepest studies of all forms, his power outmatches even the most powerful magic users, including Grand Sorcerer Niate, and matching up to all-powerful beings such as Ohm'Brahman.

Jesavich makes extensive use of necromancy and sorcery abilities when he is on the offensive, and arcane and elemental abilities when he is on the defensive. His most common ability that he uses is Necro-lightning, a spell that allows him to expel powerful lightning from his hand. He is also known to create a powerful type of sword exclusive to Necromancy, the Necroblade, which is made up of pure, sharpened crystal and enhanced with necromantic energy. These swords are often used in pairs, though he is known to create multiple swords to control with his mind, or even to use as projectiles.

His most powerful ability is his unique power to transfer his soul to other bodies, and remove or silence the soul of those whom he possesses. When attempting to take possession of a body, he begins to destroy the host's mind and soul from within, effectively hollowing out the host's mind, allowing for Jesavich to take control of it. However, he is unable to take control of a host if their will is strong enough, and they have extensive peace-of-mind. In that case, the host is able to fight against his control, and effectively kick him out.

Despite his all-powerful abilities, Jesavich can only use one form of magic at a time, which he can switch between at will. A severe weakness in using all forms of magic is that the energy of one form can interact with another, which can harm or even kill Jesavich's vessel. Although this is a minor setback for the Eternal Necromancer, losing his avatar can hinder his combat abilities.

Lord Jesavich was originally named "The Shadow Lord", which was later changed to his official title within Umbristic State ranks.

Lord Jesavich represents political corruption and hatred, as he uses his voice to spread his ideals amoungst millions, which inflicts hatred against certain groups of people and makes Jesavich a more powerful leader. He uses hatred and corruption to get things to go his way, and uses corruption especially to turn the most innocent people into hate-fueled torturers and make his twisted thoughts seem correct. This is also emphasized by his initial appearance to help his followers, but, secretly, hates everything and commits atrocities for his own end.

Lord Jesavich was one of the first characters to be planned and added, falling behind King Earnet, Warlord Bjorin, and Ohm'Brahman.

His avatar was originally intended to be a Jaar, but was changed to a Human to add more immorality to his character.

In earlier concept art, Jesavich seemingly has a full neck. It wasn't until his newer designs changed his neck design.