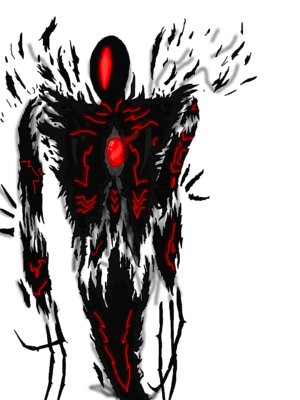 The widely-accepted appearance of the Red Eye

The Red Eye is a fictional large creature who serves as a deity to the Sorcerers of the Red Eye. It is said to be the embodiment of all magic, arcane, sorcery, and energy on Uloff, and feeds off of the hate and sorrow of living creatures. It is known to tear apart and consume inhabited dimensions, radiate and invoke hatred and violence, and has a habit of possessing individuals and using them to do its bidding. Its character was initially created by Grand Sorcerer Niate, who used the figure to create a reasoning for the presence of magic and religion behind the creature. Using this newfound religion, Niate had created a cult following it.

However, Niate's true intentions behind the creature's existence and the religion were more sinister than his followers have realized. Using the religion, Niate instilled a sense of violence and bloodlust to its followers, having them believe that acts of violence satisfy the Red Eye, allowing the individual believer to continue their use in Sorcery. Niate uses this in order to forward his vision of a purely chaotic world.