Uloff is the home planet of the races within the 2nd Legion and The Arbiters, and the planet where Age of Warscape takes place. Uloff has three continents: Moridahn, Gaderon, and Blackfall. 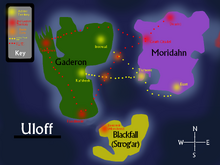 A map of the known Uloff

Uloff's exact origins have remained a mystery. Most believe that it was created by the gods Ohm'Brahman and Haed'Vishnu a few thousand years before the events of Warscape began. However, this theory was never proven to be correct nor incorrect, and remains to be a popular belief. Uloff's creation has never been a primary focus for Zal'nier scholars, and was never a question among Uloff inhabitants.

Uloff's temperatures average to about 70° in the summer, and to about -20° in the winter. Its ecosystem is very large, ranging from grasslands, forests, tundras, deserts, volcanic, and sometimes rock. The planet is also highly mountainous, with hundreds of large mountains and hills across its three continents. The larger mountains are typically covered in snow around the peak, and are usually hostile.

Uloff is mostly water, being covered in one ocean, known as The Churning Sea. Three large continents reside on the planet: Moridahn, Gaderon, and Strog'ar (Blackfall). The water is mostly salt water, but freshwater can be found in runoffs, rivers, small lakes, and streams.

The planet will usually have warm, bright summers and hostile, freezing winters. Though this depends on the region, most weather will usually be the same. Storms and rain are also very common year-round.

Uloff is home to many different species. The dominant species are the Human, Elf, Jin'tulu, Dryad, Jaar, Herasothian, Gnome, Orc, Latlazerian, and Dark Elf. There are also more minor species found on the planet, such as the Mountain Troll, Yihuu, Livingwood, and Razious. Wildlife is also highly abundant, which includes Boar, Wolves, Moose, Horse, and Bear.